If you asked Orville Wright to autograph your copy of John McMahon's 1930 book "The Wright Brothers: Fathers of Flight", you'd likely not see the book again. He found the book to be an invasion of privacy, full of imagined dialogue, and inaccuracies. Orville, writing to John W. Wood in 1939 stated "It was an unauthorized publication and is extremely inaccurate. He had no right to publish it". 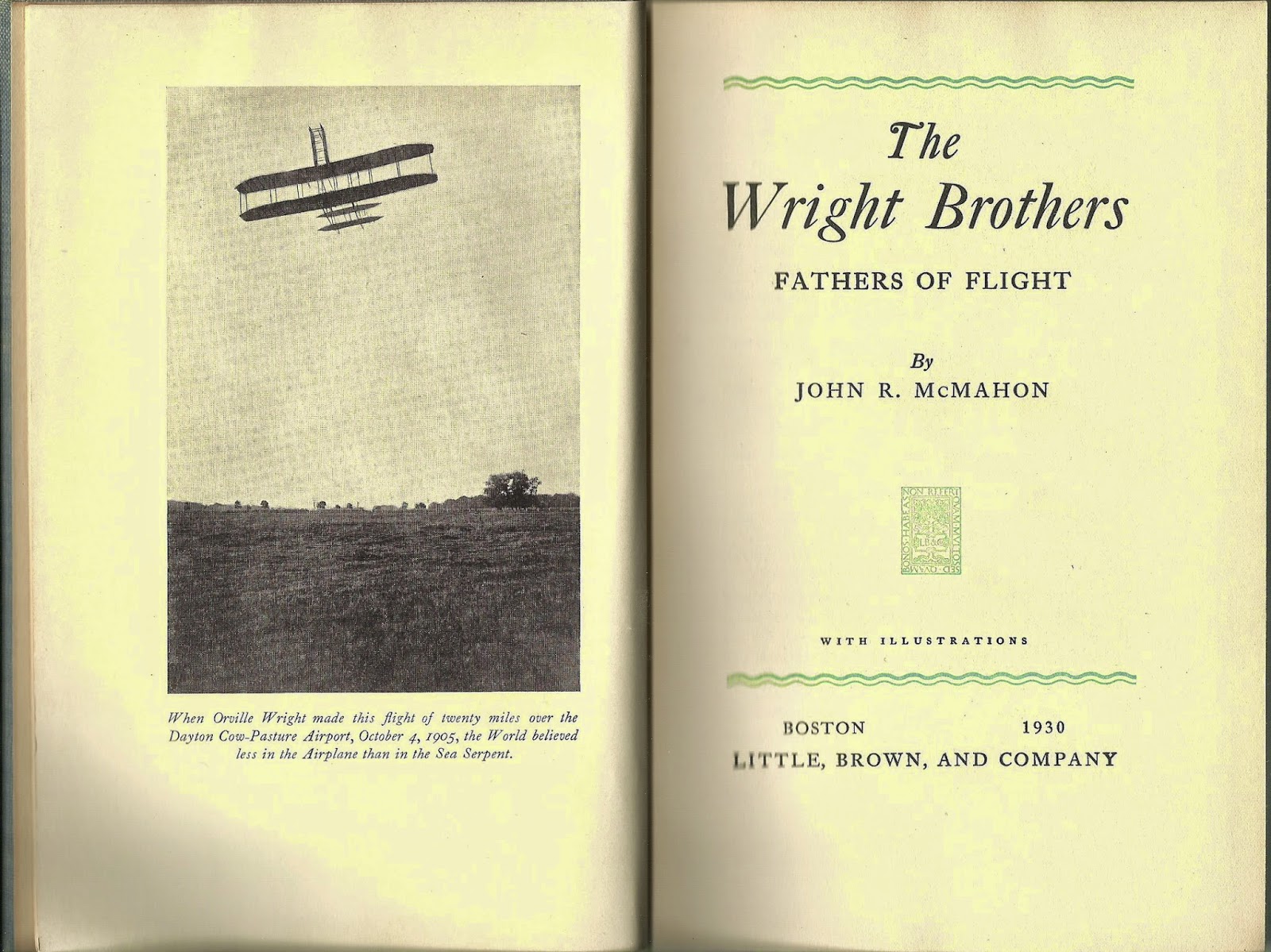 Earl Findley and John McMahon spent time with the Wright family in 1915, gathering information with the intent to publish a book on the accomplishments of Wilbur and Orville Wright. Upon reading the draft of the manuscript, Orville put an end to the venture. Years later, McMahon, going against the wishes of Orville, published the material in a number of magazine articles, and then compiled the information into book form in 1930.

Diaries 1857-1917 Bishop Milton Wright, WSU-
1915, Thursday, July 15 "Mr. Earl N. Findley, of N.Y. Tribune and Mr. Jus. R. McMahon came home with Orville, on morning train. They dined with us."
Saturday, July 24 "Earl Findley and John McMahon have been with us since the 15th.
Monday, July 26 "Orville went to New York. In the evening, Katharine and Mr. Findley and Mr. McMahon went to Lorin's, and came home at 9:25."
(Possibly during this visit with Lorin, Findley and McMahon obtained the ink drawn map prepared by Lorin, showing previous homes of Wright family, and travel locations of Bishop Wright's ministry. See portion of map below- Matt Yanney)

The Bishop's Boys, Tom Crouch, pg 475-76- "For...Findley, access to the historic letters, diaries, journals, and photos stored in the laboratory on North Broadway was through Miss Beck. She knew the story, and the materials, as well as Orville did.......In 1915, at the very beginning of their friendship, Orville agreed to allow (Earl) Findley and a young friend, John R. McMahon, to prepare a biography of the Wright brothers. They visited Dayton, interviewed Orville, Milton, and Katharine at length, and were given limited access to the papers. They worked for six months on a first draft, which Findley mailed to Orville. Confined to bed with back pain, Orville thought the manuscript entirely too personal and chatty....." Pg 517, "McMahon, who had more interest in publishing than in preserving a friendly relationship with Orville, stewed over the rebuff for fourteen years. Finally, in 1929, he submitted a rewritten version as a series of articles, "The Real Fathers of Flight", to Popular Science Monthly. The following year he brought out a slightly altered version as a book, The Wright Brothers: Fathers of Flight." Pg 518, "Orville's disgust with the book was deep and unrelenting...he received a copy from a distant relative asking him to autograph it....he refused, keeping the book and sending an autographed photo of the first flight instead...."

In a letter dated September 25, 1939 to John W. Wood, who had asked Orville to make comments of Wood's manuscript for his book "Airports- Elements of Design", Orville wrote-
"Beginning near the bottom of page 1 is a record of several flights made in 1904 and 1905, taken from McMahon's book, "The Wright Brothers". Almost none of the data for these flights is correctly given. I therefore shall not attempt to correct them, but am sending you a bulletin of the Aero Club of America, March, 1906, which gives a correct account of the more important flights of 1904 and 1905. (See my post "Witnesses of Wright Brothers Simms Station (Huffman Prairie) 1905 Flights" for Aero Club bulletin March 1906 photos- Matt Yanney) Not only were McMahon's figures incorrect for the flights of August 22nd and September 15th, 1904, but the nature of the flights were misrepresented. The flight of August 22nd was not even the longest up to that time, nor was the flight of September 15th the first circling flight in which a half circle was described."
"Page 4 under "First Circling Flight": The sentence beginning "It was his privilege" is incorrectly quoted by McMahon, and would give the impression that Root thought this to be the first successful flight with an aeroplane, while as a matter of fact he was trying to say that this was the first successful attempt to complete a circuit and return to the starting point. The sentence should be as follows:
"It was my privilege, on the 20th day of September, 1904, to see the first successful trip of an airship, without a balloon to sustain it, that the world has ever made, that is, to turn the corners and come back to the starting-point."
--A.I. Root, "Gleanings in Bee Culture", Jan'y 1, 1905
"I am sorry that you got hold of this McMahon book and would prefer that you make no mention of it. It was an unauthorized publication and is extremely inaccurate. He had no right to publish it.
Very truly yours,
Orville Wright