The 1913 Dayton Flood, and the Wright Family

(Revised July 21, 2018) 1912 was a difficult year for the Wright family, with the passing of Wilbur Wright to typhoid fever May 30th of that year. 1913 was no kinder to either Dayton or the Wright family. While 1909 was the year of celebration in Dayton, filling the streets with proud citizens to welcome home the Wright Brothers.... 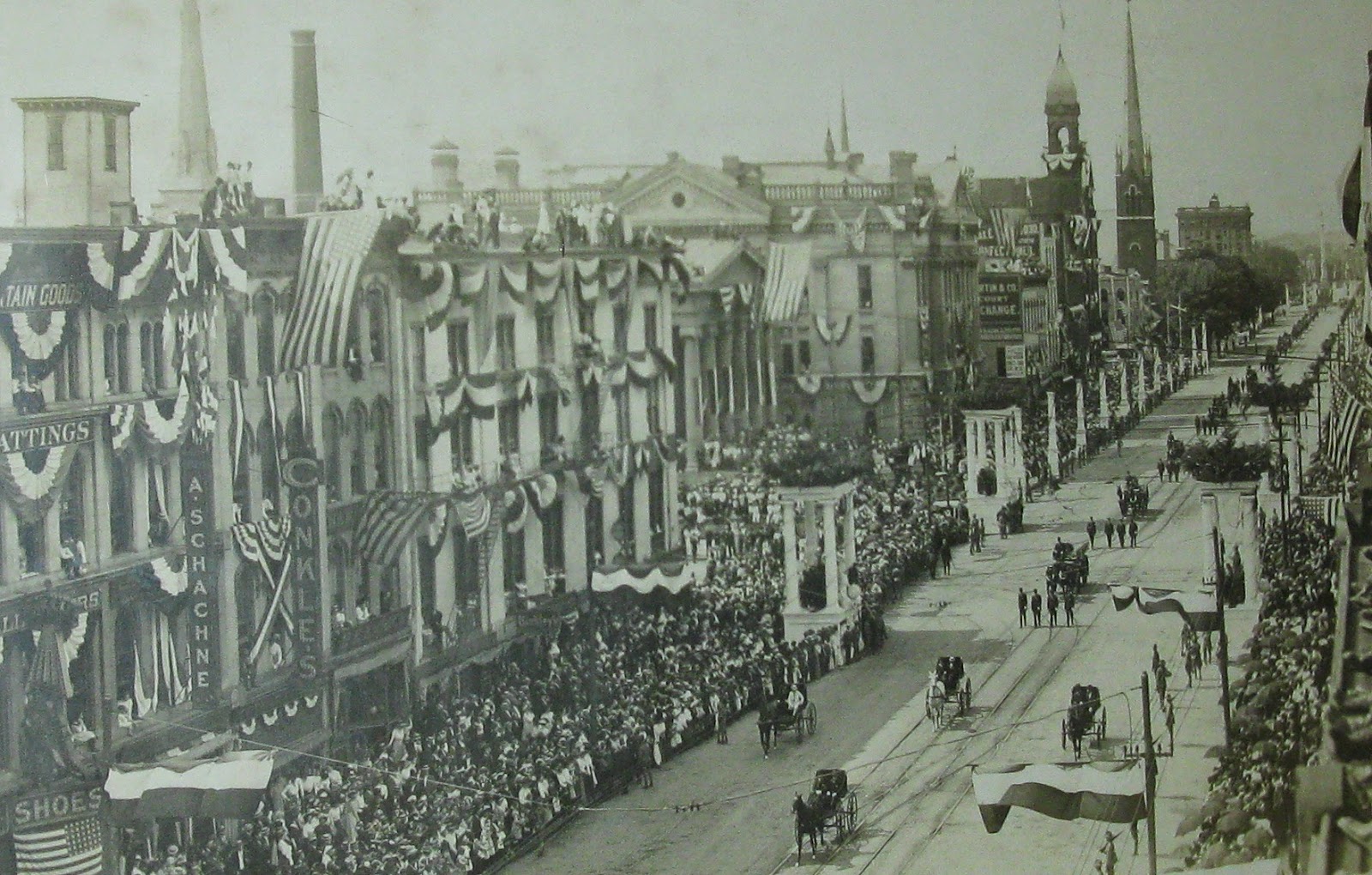 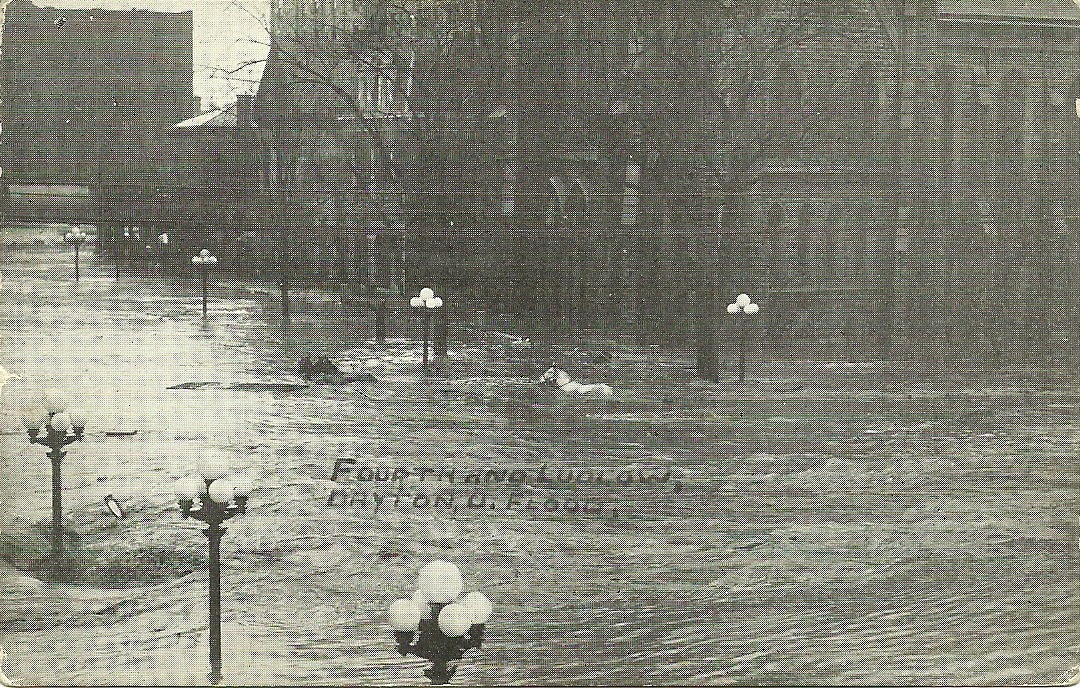 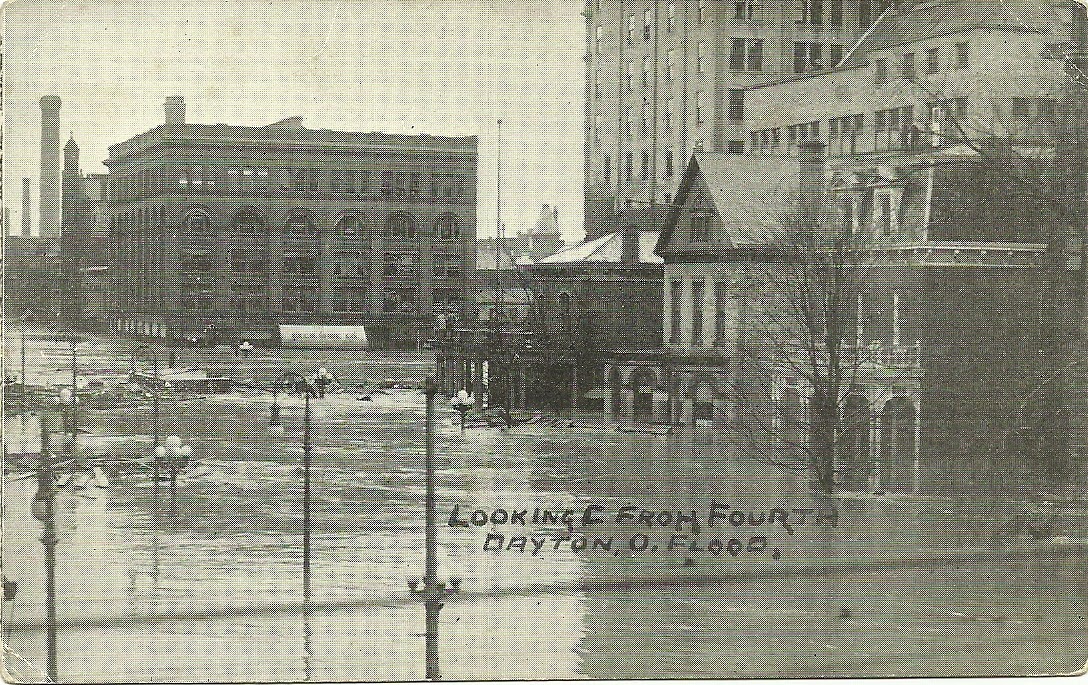 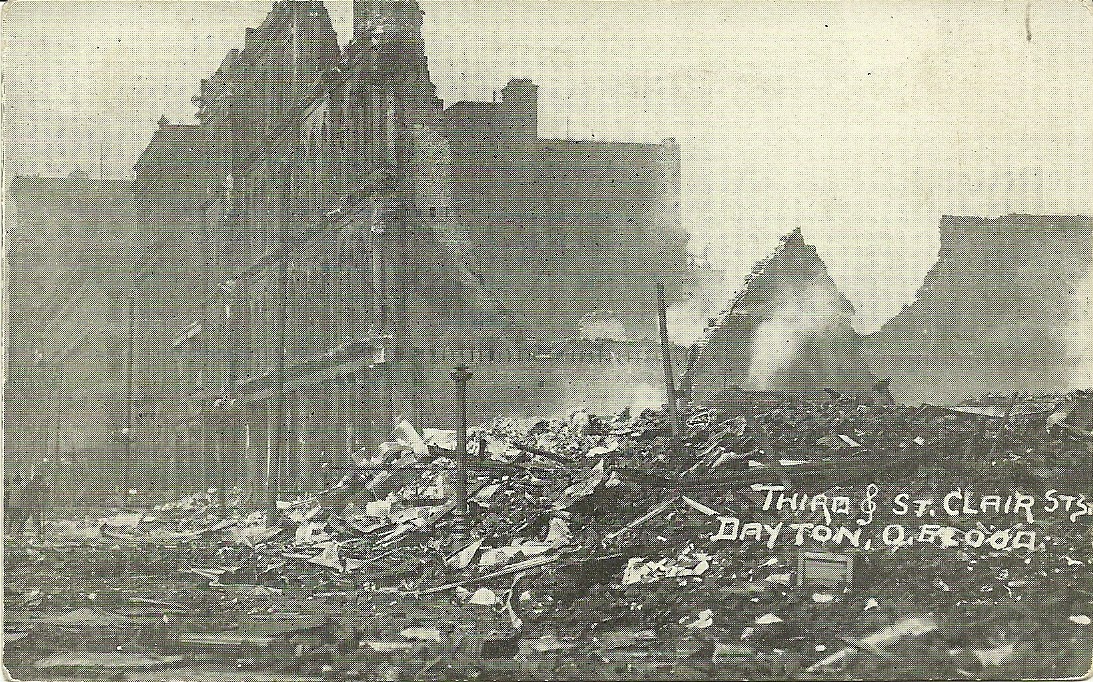 Grand Eccentrics, Turning the Century: Dayton and the Inventing of America, by Mark Bernstein, 1996, Ch 14, Flood- "That evening on the west side of Dayton, Bishop Milton Wright recorded in his diary: "I apprehended a flood. Felt the danger of it."......On Hawthorn Street....brother and sister had just thirty minutes to move belongings to their second floor before evacuating. By nightfall, six feet of water stood in the Wright's home.....Orville abandoned on a shelf in the shed near the house the irreplaceable collection of photographic negatives he and Wilbur had taken at Kitty Hawk and Huffman Prairie......Fire was Orville Wright's chief concern that evening. From the safety of high ground, he watched as buildings near his office on Third Street burned. The 1903 aircraft sat disassembled in packing crates behind the shop; of greater anxiety to Orville was that his office on the building's second floor contained his and Wilbur's lives' work- all the records of their glider trials, their wind tunnel work, their study of propellers. Orville went to bed Tuesday night believing the whole of it would be lost to flames......The facts were bad enough. Fifteen square miles of Dayton lay under six to eighteen feet of water. Fourteen thousand homes destroyed or damaged...."

A Pictorial History of the Great Dayton Flood, March 25, 26, 27, 1913, prepared by Nellis R. Funk, 1913: The map indicates the extent of the flood in darker gray. The two yellow dots indicate the location of the Wright Cycle Shop, and the Wright Home. 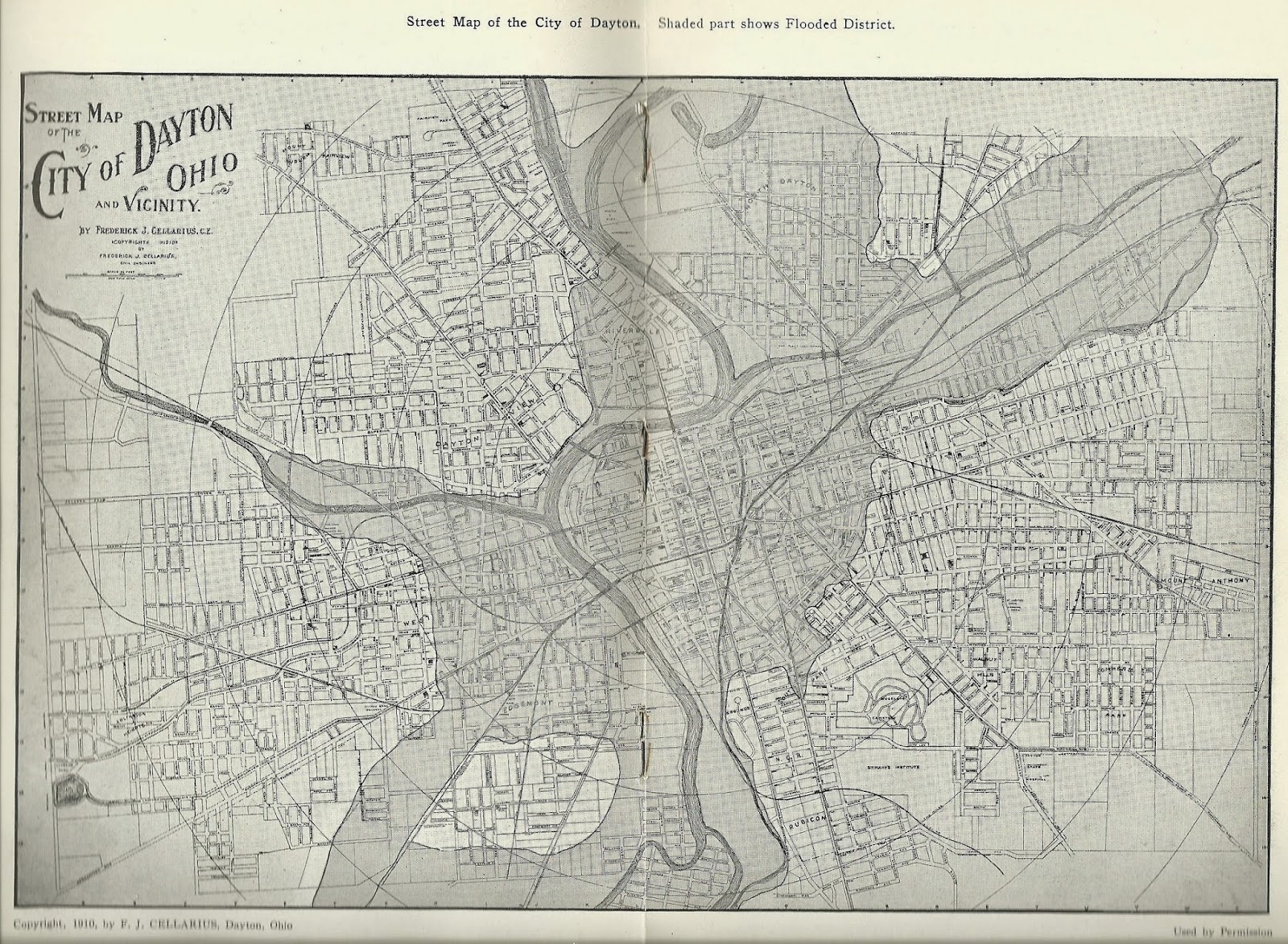 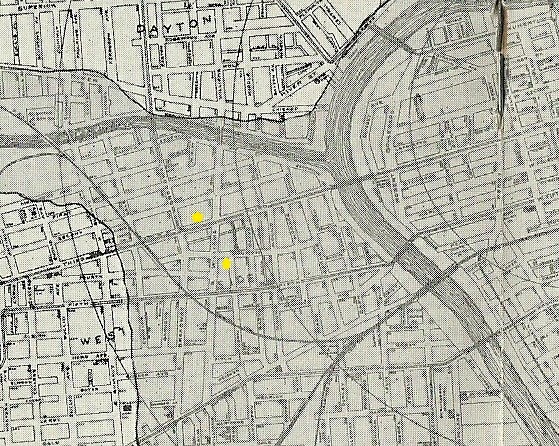 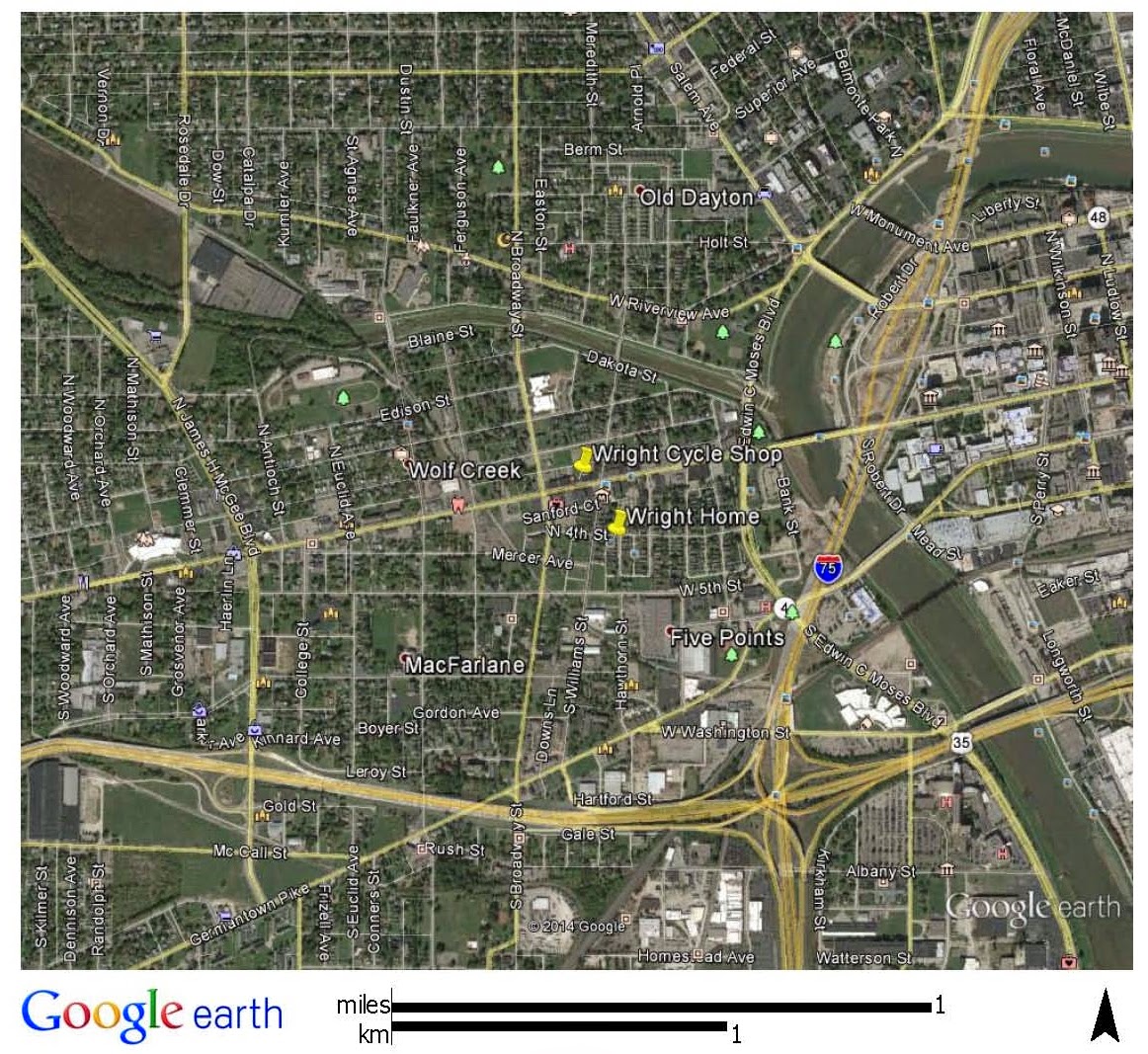 Through Flood, Through Fire, Personal Stories From Survivors of the Dayton Flood of 1913, by Curt Dalton, 2001- "Orville and his sister escaped by means of a truck, being carried through four feet of water. Luckily the flood stopped short of Orville's factory adjoining their home in which were stored all of the original plans for the first airplane. A house adjoining the factory also caught fire during the flood, but the factory was undamaged." (The previous two sentences are incorrectly stated. Orville's factory was not adjoining their home. The Wright factory was located outside the flood zone, several miles to the west on West Third Street. - Matt Yanney).
"Katharine & Orville, not knowing where their father had been taken, hung signs on Summit Street asking that anyone hearing of the whereabouts of Bishop Wright to please get in touch with them. Word reached Orville the next day, and he made arrangements for his father to stay at the home of E.S. Lorenz's which was outside of the flood district. It wasn't until April 18th that Orville was able to bring his father back home to stay. Orville whimsically spoke to reporters a few days later, "We were lucky. It is the irony of fate that at the critical moment I was not able to get away with my folks on one of my own machines...."

Bishop Milton Wright Diaries, WSU, 1999-
Tuesday, March 25- Alarm about the waters rising. Russell Harzell comes with a canoe after Mrs. Wagner, and takes in me. We glide down Hawthorne and on Williams Street to William Hartzell's & they receive us most Christianly. The waters rise six or eight feet by 9:00, night, begin to subside at 11:00.
Wednesday, March 26- The waters fall about a half inch, an hour and till next night. We have a neighbor next north who came in (by bridge). From others we are cut off entirely. Our children advertize for me. There was a Washburn girl about three years old drowned. She lodged. Snyder waded & brought her in from bushes; Catharine.
Thursday, March 27- Mr. Siler passed, saw me, and reported to Orville, who came after me and Forest Stoltz. He got an automobile which took us to E.S. Lorentz, opposite the Seminary. Where I saw Katharine. I dined there. Frank Hale and Charles Grumbaugh took me to Lorin's, Corner of Grand & Grafton Avenue.

The Bishop's Boys, Tom Crouch, 1989, pg 454- "The things that remained downstairs at 7 Hawthorn Street and in the bicycle shop were a total loss. Fortunately, the materials relating to the invention of the airplane survived with little damage. Rummaging through the shed, Orville found that some of the emulsion had begun to peel from a few of the glass plate negatives, but none was a total loss. The most important photo- the plate that John Daniels exposed just after the machine lifted off the rail for the first time on December 17, 1903- had lost only a small bit of emulsion in one corner. The image was undamaged.
The records of their experiments were safe as well. The water had not reached the second-floor office, and the fire that swept through other buildings on West Third left the bicycle shop untouched. Even the remnants of the 1903 airplane, stored in the low shed at the back, survived unharmed. The precious bits of wood and fabric, submerged beneath twelve feet of water, were protected from damage by a thick layer of mud."

Evidence of the flood damage can be seen in the Wright's glass plate negatives. A search on line of "Wright Brothers glass plate negatives" will present image after image of cracked plates with missing emulsion, with various degrees of damage. Fortunately, the photos made from these negatives prior to the flood were preserved, and so undamaged images do exist.

Steele High School, located southeast of the Main Street bridge, suffered a partial collapse of the exterior wall at the northwest corner facing the river. Katharine Wright had taught here up through 1908. 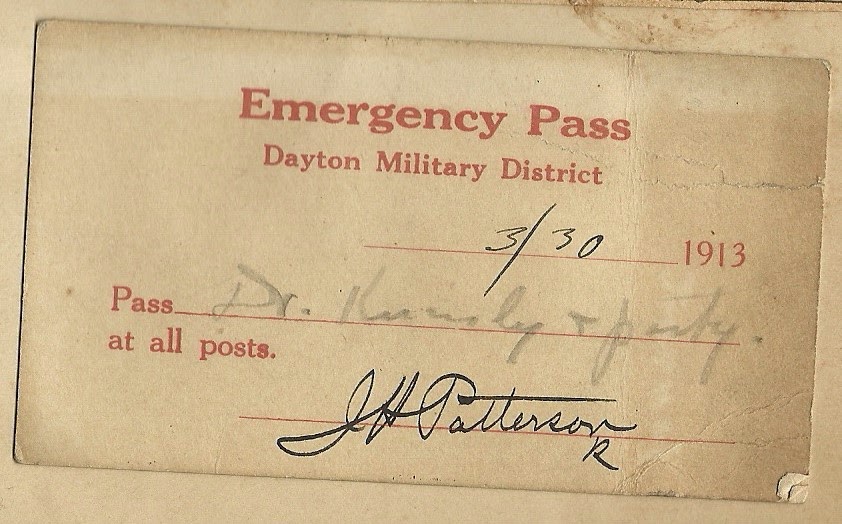