Orville Wright had an appreciation of the arts, but modern art.......not so much. From "Wright Reminiscences", compiled by Ivonette Wright Miller, 1978, Milton Wright, Grand nephew of Orville Wright, is quoted "The most unique contribution I can add to reminiscences of Uncle Orv are letters he wrote kidding me about modern art." Orville, at the age of 73,  really shows his sense of humor in this letter.

I have just come upon this exquisite piece of modern art--"Woman on the Beach"--which I feel sure you can appreciate, but which, without my sending it, you may not happen to see.
When I gaze upon it my admiration nearly puts me in a swoon. Such poetry-- fundamentally ardent, yet so familiar: Its furtive charm and spirit pervade the entire canvas to its remotest corners. Profundity issuing from every pore is represented with bold broad strokes and somber colors. Abysmal silence vies with chaotic clamor.
The woman's head, as stated in the caption, is seen, though evanescent, in the upper left hand corner. What joy, what happiness, what pain and what despair is pictured there. The artist's endeavor to efface himself is intriguing, and almost successful, for only one foot is seen protruding from her mouth. The German bulge, portrayed in the foreground, proves the master hand of the artist by clearly showing an American victory.
In treating a subject so beautiful, I should shun vulgar expressions, but facts are facts, and Whats His Name has knocked Picasso's eye out. You can actually see the eye just above "upper left hand" in the caption.
This picture is a gem of the ages. Rubens, Van Dyke, da Vinci, Velasquez, Raphael, nor Rembrandt ever painted anything that can be compared to it. Even Picasso and Gaugin will have to look to their laurels. (I am sorry that I failed to keep the name of this scintillating  genius, but his name will still live when Rembrandt and his passe tribe have gone down to oblivion; so I shall continue to call him "Whats his Name".) The paintings of Rembrandt and his ilk are good only when viewed from one direction, while Whats his Name's "Woman on the Beach" is equally good whatever the direction of view--upside down, sidewise, diagonally, or even better still when seen from the back side of the canvas. What genius!
While soaring in the atmosphere of this modern art I was so filled with ecstatic bliss I felt dizzy, but now I am down to earth again. My head still spins-- things go round and round. I wonder is it modern art or is it indigestion-- the two are so much alike.
Well, now you can't say again that your Uncle Orv doesn't say anything when he sends you these beautiful reproductions of modern art!
How's Trotz?
Affectionately, Uncle Orv.

Orville expressed his thoughts well concerning Modern "Art", and I am right there with him on this subject. I am curious what his opinion might have been on the following examples of art work depicting himself and his brother Wilbur.

This collector plate has Orville Wright's name spelled correctly, but I'm not sure who the person pictured is supposed to be.....perhaps some neighbor friend of Orville's?
Wilbur's likeness isn't much better. But at least certain details are correct. Wilbur was losing his hair, and this likeness does indicate that reality. The next artist rendition however........
Wilbur Wright after a hair transplant? So, I'm guessing the artist never met Wilbur, and never saw a photograph of Wilbur, and so perhaps had a friend pose for the picture who maybe talked to someone who knew someone who once saw Wilbur from a distance, in the dark?

This next one shows Wilbur perhaps recovering from wisdom tooth extraction surgery?

This pair of stamps shows Orville Wright on the lower stamp, but I have no idea who the other guy is supposed to be. 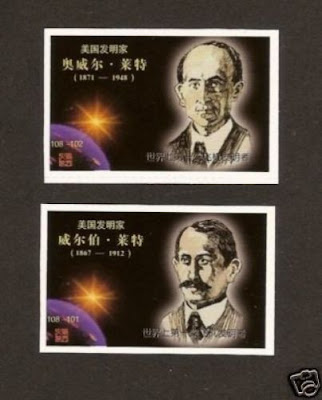 Then there are the Gangster Wrights, one of my favorites......

The next artist rendition is interesting. Orville looks like he's about to sneeze, and both Orville and Wilbur have those scary eyes.....maybe from not wearing goggles when they flew? 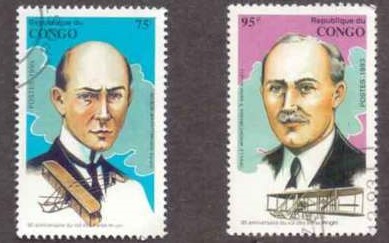 
What is really confusing though.....if you're going to issue a commemorative coin to honor the Wright Brothers, wouldn't it make sense to actually provide an image of the Brothers on the coin, in lieu of these two guys? Is that Dennis Weaver on the right?

What if the Wright Brothers had not experimented in flight in the early 1900's?

The Nine Lives of Orville Wright.

A Journey Back in Time- An Interview with Orville Wright.

Posted by Matt Yanney at 7:59 PM No comments: