The Technology Review, 1943 "Objective, factual, and detailed, Mr. Kelly's book is an extremely valuable assemblage of the elements in the drama, and on this count its value is enhanced by the fact that the author had in his work the interest and support of Orville Wright, who read the manuscript and verified the accuracy of statements......The Wright Brothers is to be regarded as an able assistant to the historian in time to come. For the reader in the present, it is a friendly and informative way of coming to know two unassuming men who did a great thing."

"Bringers of Wings", New York Times Book Review, by Russell Owen, May 23, 1943- "Two men, Wilbur and Orville Wright, by their invention of the airplane changed completely the size and habits of this world...But if one looks for any enlightenment in this book on the personalities of the Wright brothers he will be disappointed. It is not a biography in the remotest sense, except for a few childhood recollections......only the reflection of what they accomplished.....the entire book sounds as if it were written with the dim figure of Orville peering over the author's shoulder and telling him what he could and could not use.......the fact that Baldwin tried to get around the wing-warping principle of the Wright's by inventing the now universally used aileron is not given its fair degree of importance..."

Fred Kelly's book "The Wright Brothers" is unique in the sense that Orville Wright reviewed it and approved it. When asked by John W. Wood in an interview with Orville on February 15, 1940, Wood wrote "Repeating what he had written me about the first write-up on "Wright Field '04-05' which I had sent him he said that McMahon's book "The Wright Brothers" was extremely inaccurate and misleading and he would therefor naturally prefer that I did not quote from that book." (See my post "Orville Wright's Criticism of McMahon's book 'The Wright Brothers: Fathers of Flight'") "With the corrections he indicated made he felt the write-up for Airports of the early Dayton field was unobjectionable. Regarding McMahon's book I said I did not know what book to read, about him and Wilbur. He (Orville) said there wasn't any. He said he had had a manuscript for two years, (written by someone else I understood) about him and Wilbur which he had been asked to correct but that it was a long job due to many errors and he just hadn't had time." The manuscript Orville was referring to was undoubtedly "The Wright Brothers" by Fred Kelly. Per Tom Crouch's "The Bishop Boys", pg 519, "The idea of writing a biography of the Wrights emerged slowly. By 1939, Kelly was determined to move ahead, aware that handling Orville would be a difficult and delicate task.....Kelly continued to write, sending Orville long sections of manuscript for comment. Almost without realizing it, Orville agreed to let Kelly produce a book with the understanding that he would have an opportunity to go over every word."

Letter written by Fred Kelly, addressed to Fassett of Technology Review, July 7, 1943-
"Dear brother Fassett:
Many thanks for sending the copies of the Review containing the review of my Wright biography. It is a good, fair review, and I like it because it so directly contradicts some of the cracks by Russell Owen, whose piece in the Sunday N.Y. Times book section is the one nasty review the book has had. (I think Russell is vexed because he once wanted to interview O.W. and couldn't see him. But I may be wrong.)......It is possible, as I see Mr Wright frequently, that I could be collecting information on a lot of points of value to historians....perhaps I can be doing a favor to historians of the future- though what have they ever done for me."


Response letter by F. G. Fasset Jr., Editor, Technology Review, July 10, 1943-
"Dear Brother Kelly:
Save for the fact that this screed is necessarily written on Review paper, I should try to cook up a superscription emulating the delightful pungency of your "Gnaw-bone Manor." Probably I should use "Bughouse on the Charles," but I won't. I am very grateful for your letter of the 7th and its appraisal of the review of your Wright biography. My reviewer is I, and he is flattered to have his opinion asked in regard to the questions still to be answered and their comparative importance. He shares with you a profound and delightful ignorance of technical matters, but he feels that Russell Owen's crack about Baldwin and the wing warping had better be followed up..."

After Orville Wright's passing in 1948, Fred Kelly edited "Miracle at Kitty Hawk- The Letters of Wilbur and Orville Wright". His friendship and support from Fred Fassett can be seen by the note Kelly wrote in the copy provided to his friend: "For good old Fred Fassett who has been a kind of godfather to this book, giving wonderful advice and admonition at almost every stage- with the devotion of Fred C. Kelly, June 17 1951."(1) 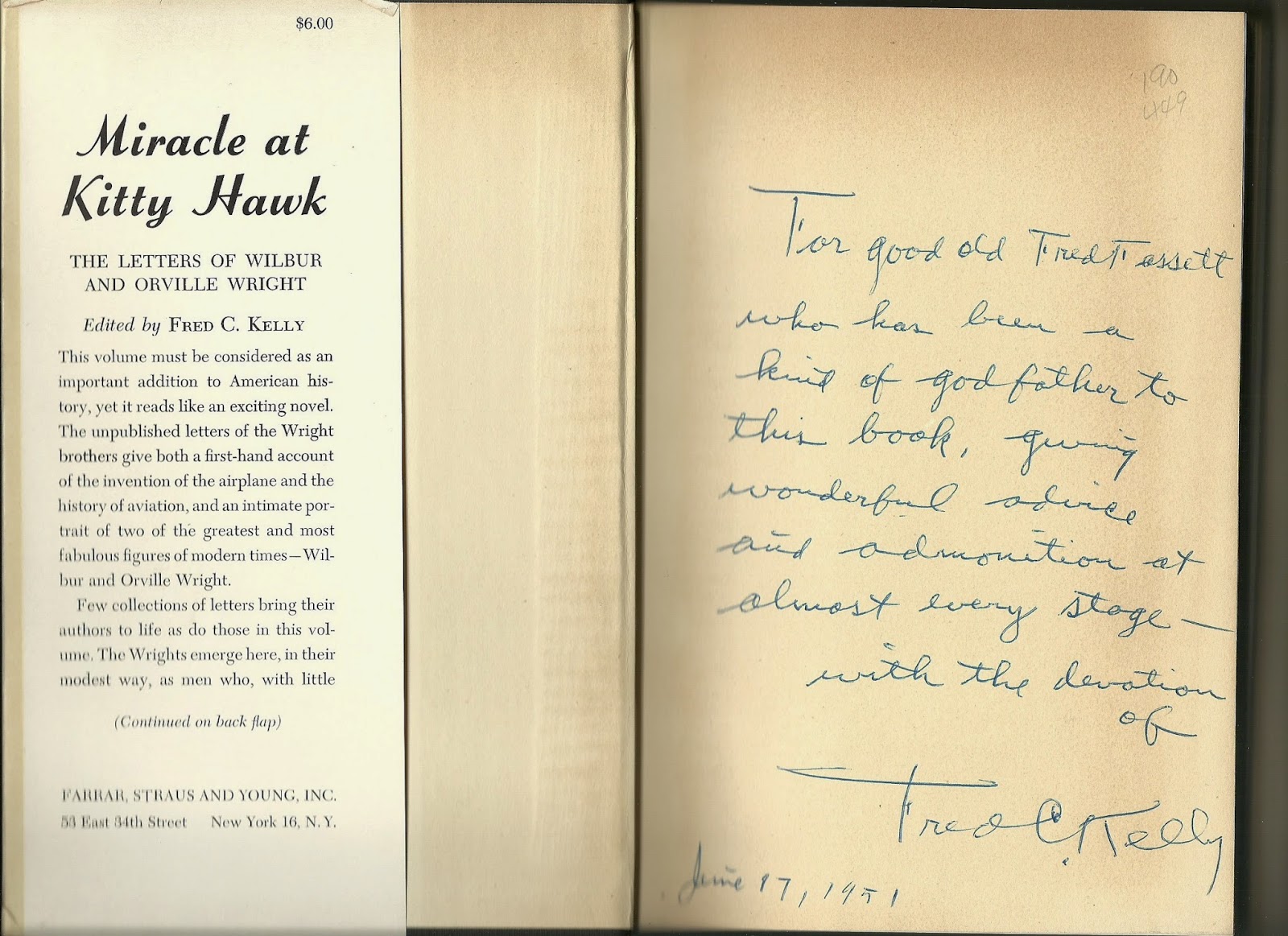 
Index of Topics
Posted by Matt Yanney at 6:26 PM