Earl Findley and John McMahon visited with the Wright family at Hawthorn Hill in 1915 for a number of weeks, interviewing the family members, gathering information with the intent to publish a book on the accomplishments of Wilbur and Orville Wright. Unfortunately, for Earl and John, the manuscript of 6 months work was reviewed by Orville Wright, and was rejected, bringing an end to the project. In later years, John McMahon published the material in a number of magazine articles, and then complied the information in his book "The Wright Brothers" against Orville's wishes. For more on this subject, read my blog "Orville Wright's criticism of John McMahon's book 'The Wright Brothers: Fathers of Flight'".
In "The Bishop's Boys", Tom Crouch writes , pg 475-76- "For...Findley, access to the historic letters, diaries, journals, and photos stored in the laboratory on North Broadway was through Miss Beck. She knew the story, and the materials, as well as Orville did.......In 1915, at the very beginning of their friendship, Orville agreed to allow (Earl) Findley and a young friend, John R. McMahon, to prepare a biography of the Wright brothers. They visited Dayton, interviewed Orville, Milton, and Katharine at length, and were given limited access to the papers. They worked for six months on a first draft, which Findley mailed to Orville. Confined to bed with back pain, Orville thought the manuscript entirely too personal and chatty....." Pg 517, "McMahon, who had more interest in publishing than in preserving a friendly relationship with Orville, stewed over the rebuff for fourteen years. Finally, in 1929, he submitted a rewritten version as a series of articles, "The Real Fathers of Flight", to Popular Science Monthly. The following year he brought out a slightly altered version as a book, The Wright Brothers: Fathers of Flight." Pg 518, "Orville's disgust with the book was deep and unrelenting...he received a copy from a distant relative asking him to autograph it....he refused, keeping the book and sending an autographed photo of the first flight instead...."


Milton Wright wrote of the visit in his diary:
Diaries 1857-1917 Bishop Milton Wright, WSU-
(Possibly during this visit with Lorin, Findley and McMahon obtained the ink drawn map prepared by Lorin, showing previous homes of the Wright family, and travel locations of Bishop Wright's ministry.)

The ink drawing shows States of Oregon, Iowa, Indiana, and Ohio, with hometowns indicated of Wright residences. Notes in pencil are by another hand, and indicate names and dates. On the reverse side of this document, a Family Tree provides information of Wright genealogy with notes by John McMahon as he refers to sections of his book. The paper watermark reads "Flexo Loose Leaf Ledger". 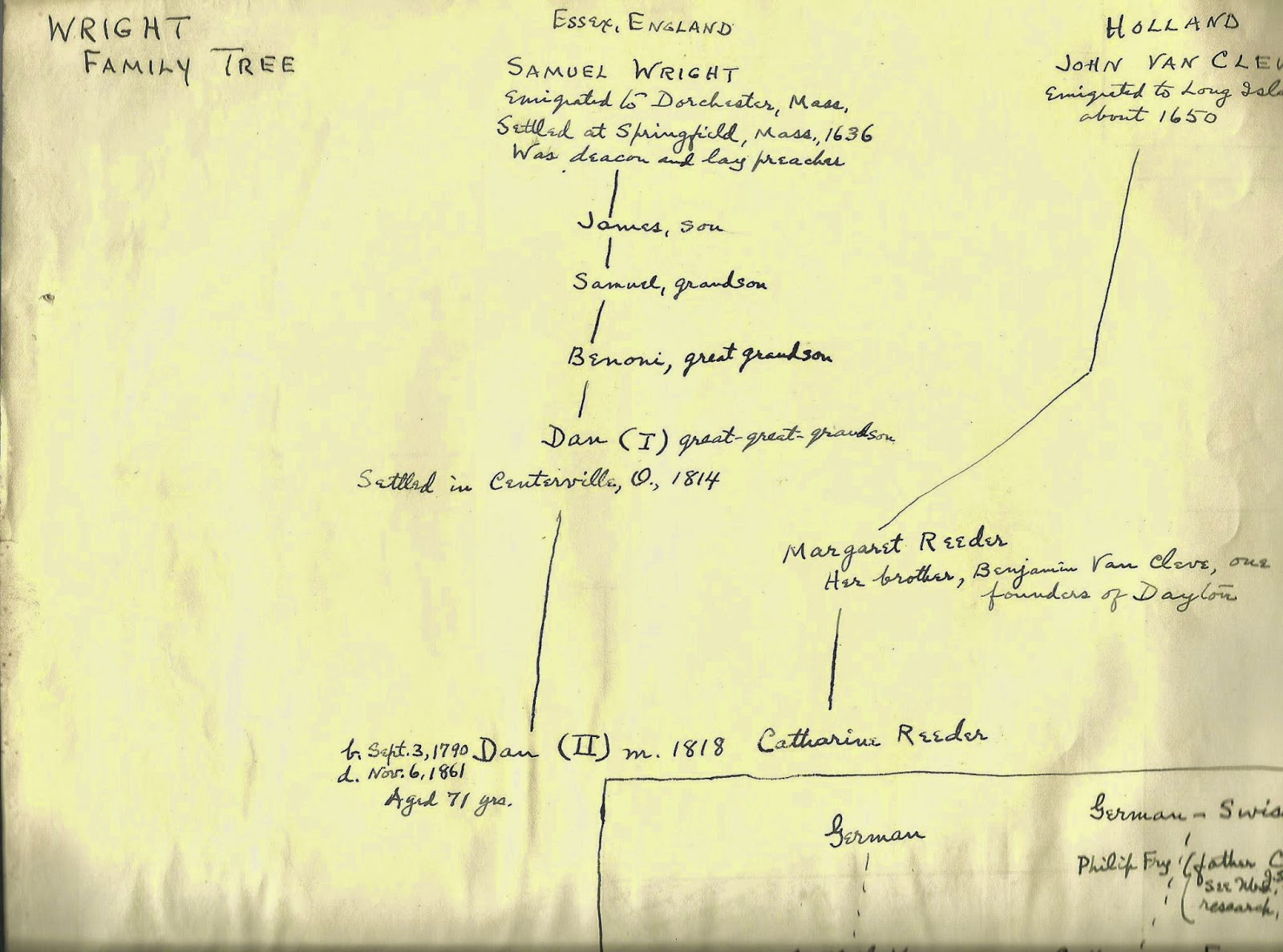 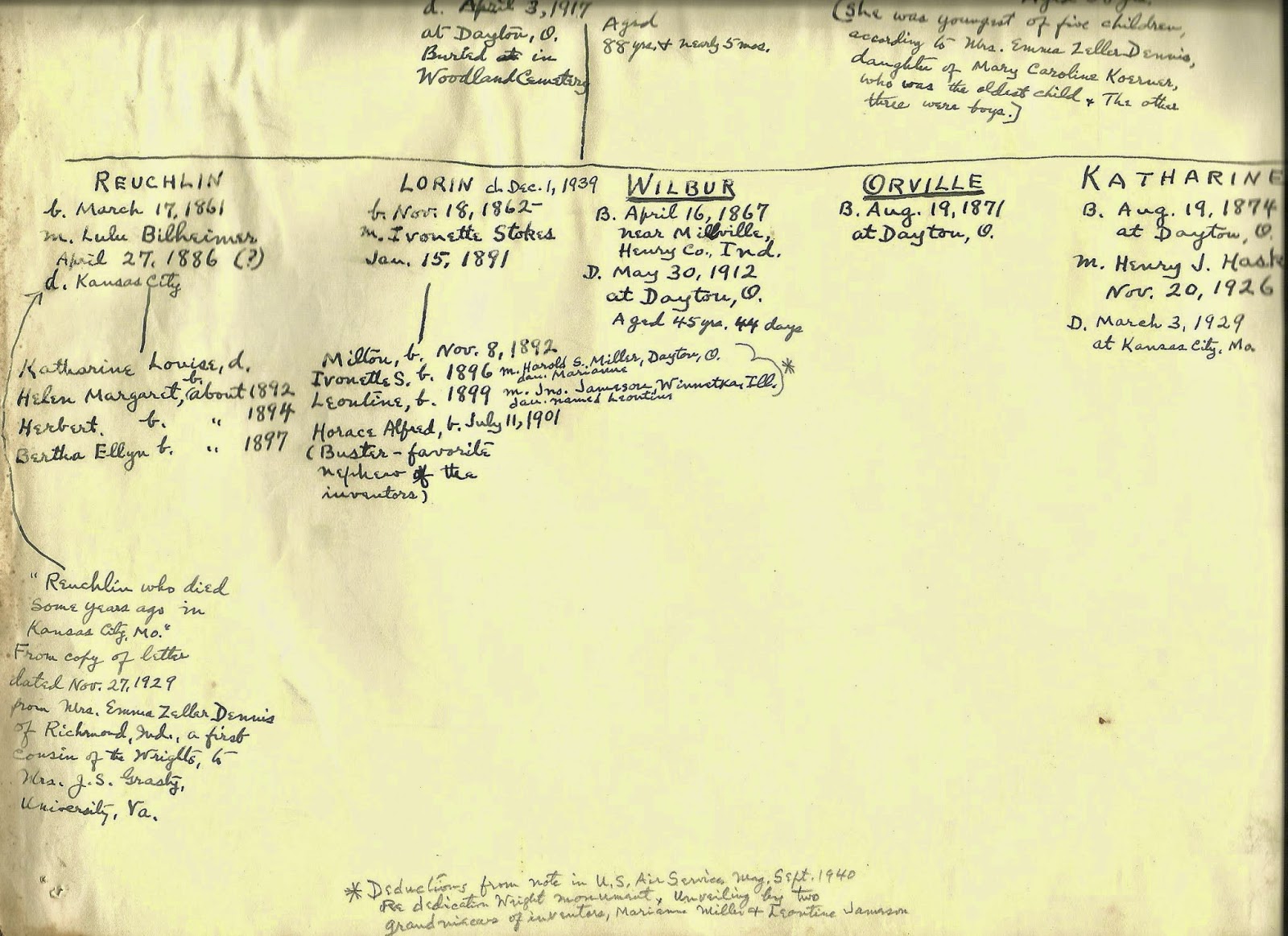