A Journey Back in Time- An Interview with Orville Wright

(Minor updates, 10/23/18) The details of how you arrived here aren't important. The fact remains that you've found yourself standing at the corner of West Third Street and North Broadway, in the city of Dayton, Ohio. The date is February 15th, 1940.  Just moments ago you were touring Hawthorn Hill in Oakwood- you had stepped into the basement vault, in our current year of 2018. The door swung shut behind you, and suddenly here you were. But one thing you do know, as you turn and face northwest, you're less than a 100' away from 15 North Broadway, Orville Wright's Lab. You don't know how much time you have, but you're not going to miss this opportunity. 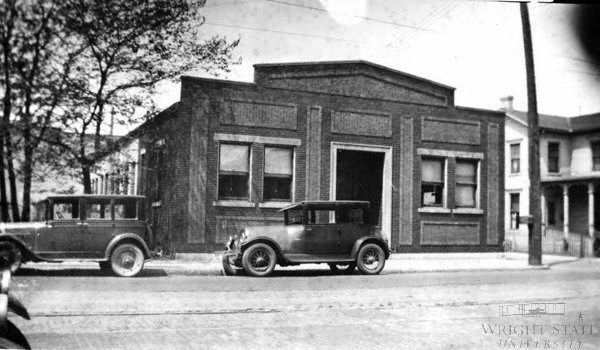 The front door of the small one story brick faced building is open. On the wall of the tiny vestibule are three framed photographs of the Wright memorial at Kitty Hawk. Orville Wright's secretary Miss Mabel Beck opens the unlocked door of the small waiting room. On the corner of the table nearest the door, you're surprised to see a letter addressed to you, c/o Mr. Orville Wright. As you're opening the letter, Orville Wright enters the room. He shakes hands cordially and smiles as you draw out a Valentine from the envelope. (Right, today is February 15th, Valentines Day was yesterday, you're thinking. The Wright family always celebrated Valentines Day. (See Valentines Day prank in my post "Orville Wright's Sense of Humor")
Motioning you to a chair he sits down. His face is ruddy and full and he seems at ease, not having the somewhat suspicious or watchful look that he might have had otherwise, had he not been expecting you. But how is that possible? You decide not to question the situation, as you just might wake up, and find it all a dream. He's dressed in an inexpensive neat dark blue suit, semi stiff white collar, cheap blue tie with a white stripe, well polished black shoes and thin black stockings. You notice an old scar over his left eye, white hair on the sides, almost bald on top, thick white mustache and black eye brows, greying.
Instinctively, you reach into your coat pocket and withdrawal a folded plan of "Wright Field 1904-1905". 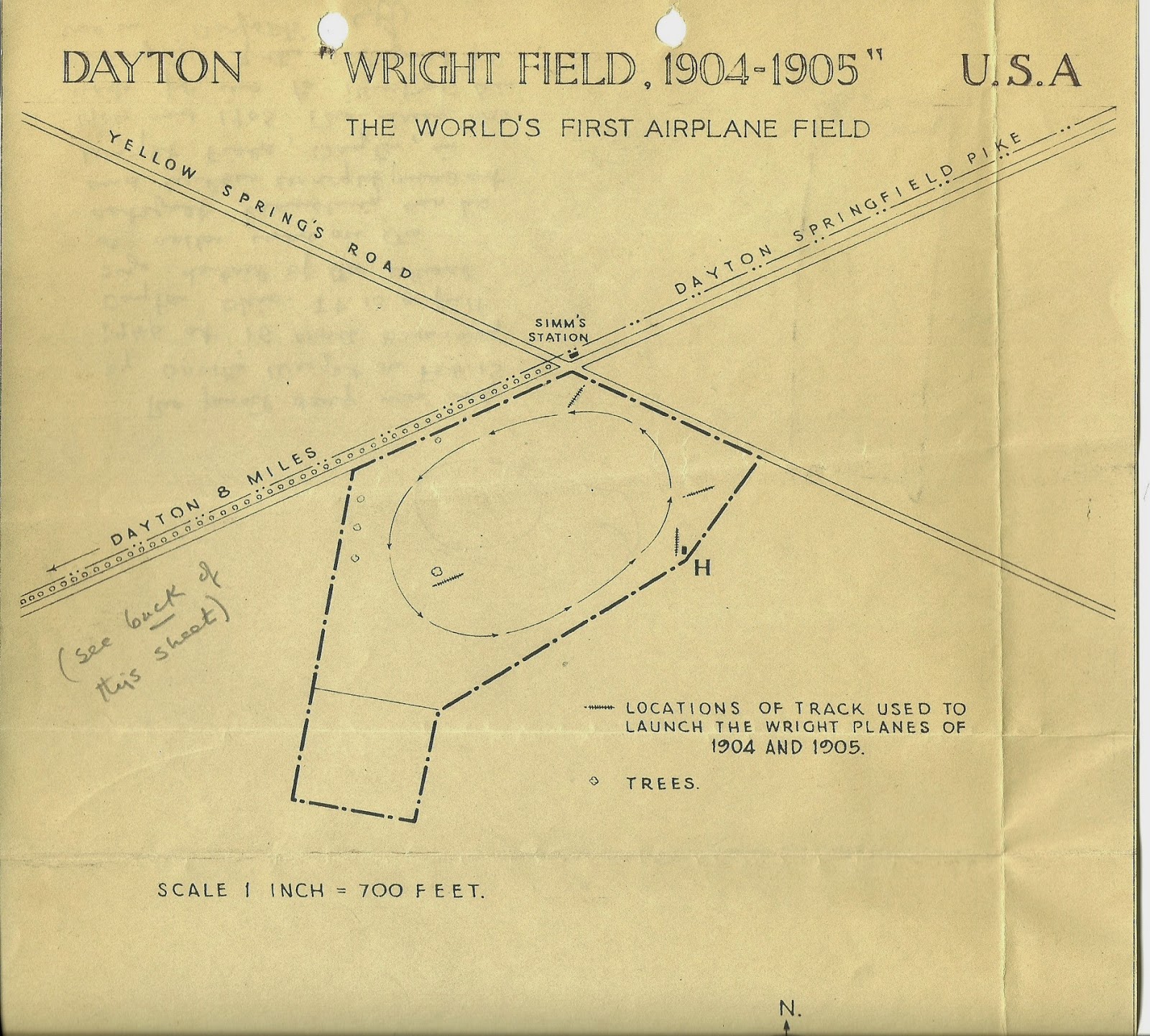 As you're wondering how that found itself in your pocket, Orville takes the plan and begins to discuss the flights of Huffman Prairie. About the map, he mentions he had drawn the original himself. He had made some of the measurements, but lacked all the angles except those made by the old Yellow Springs Road and Dayton Springfield Pike. He had approximated the other angles and perimeter of the field (which had a fence around it) from several air views of the area which he had obtained from the U.S. Army Air Corps. Regarding the catapult car used by him and Wilbur he explained that the car rode on tandem rollers or small wheels of metal with flanges which rode on a metal rail secured to a 4" by 8". Explaining this, he drew the wheel in pencil full size on the back of the plan of Wright field.

He explains that his and Wilbur's early wind tunnel was not the first wind tunnel, others had had wind tunnels but not the necessary measuring devices.(You recall a photograph you had seen of Orville admiring the wind tunnel balances, which had been misplaced since December 6th, 1916, and not found again till 1946. You're tempted to tell Orville where they are located, in an old typewriter container, but you think you'd best keep quiet, and not cause a temporal time line disturbance. He'll find them soon enough.)

You find yourself thinking about these balances, and suddenly realize the conversation has continued on, and so you snap back to attention. Orville explains that he and Wilbur glided, did not soar, in their early gliders. (That's right, as you recall he had soared for an amazing 9 minutes and 45 seconds at Kitty Hawk in 1911.) You finally get up the nerve to ask a question, "What are your thoughts on the other pioneers working independently on the flight problem in the early 1900's?"
He explains that the European pioneers in 1903 and directly thereafter principally based their work on the lecture which Orville and Wilbur Wright's friend Chanute had made before the Aero Club of France on April 2nd 1903 in which Chanute had shown photographs of Wright planes and diagrams of Wright planes given to him by the Wrights. Chanute had gone to Europe to persuade Santos Dumont to come to the St. Louis Exposition. The Europeans wouldn't believe Chanute when he told them the Wrights could glide in a ratio of 10 to 1 angle. Orville explained that Santos-Dumont had had a difficult time with his dirigible at the St. Louis Exposition. The crowds were angered when Santos-Dumont (considering the weather was not right for a dirigible flight) would not fly. The dirigible had finally been mysteriously damaged at night. He then said, Wilbur and he had always thought that Santos-Dumont had done it himself to make his graceful exit from a disappointed exhibition crowd and critical press which had been making short of him. (You don't recall hearing this before in your reading, and so you ask if any of this has been written down, are there any good books to read on the Wrights, such as "The Wright Brothers" by John McMahon, being careful not to mention book titles written after 1940, thinking about that tearing of the space time continuum thing again).

Orville replies that McMahon's book is extremely inaccurate and misleading and he would therefor naturally prefer that you did not refer to that book. So you ask then, which book should you read about him and Wilbur. He responds that there wasn't any. He says he had had a manuscript for two years written by someone else about him and Wilbur which he had been asked to correct but that it was a long job due to many errors and he just hadn't had time. (Thinking about who this author might be, a memory comes to mind, and you recall that Fred Kelly of Xenia Ohio had been working on his book "The Wright Brothers", to be published in 1943. You choose to not let on that you have the inside scoop to this story).

You ask Orville about their experiences at Kitty Hawk prior to the 1903 flights. Orville responds that at Kitty Hawk, Chanute had brought along a mechanic. This mechanic had not proved very satisfactory so they decided to let him go. During the next meal the mechanic said he thought he would return by 'way of Washington'. It flashed through the minds Wilbur, Chanute, and himself that the mechanic was planning to go by way of Washington in order to see Langley and tell him of some of the basis of the progress in flying they were making. Chanute spoke up and said he thought he also would return by 'way of Washington'- which he did. On reaching Washington, Chanute went straight to Langley whom he just caught on the point of leaving Washington, in fact Chanute rode in the carriage with Langley who was on his way to the railroad station. The mechanic sought out Langley but got there too late to see him, so wrote Langley instead, Langley sending the letter (or letters) on to the Wrights. (You recall that this mechanic was none other than Augustus Herring. You remember reading about this event in Tom Crouch's book 'The Bishop's Boys', but since Tom wrote the book in 1989, you think it wise to not mention it to Orville). Orville then said that had Langley lived (beyond 1906) that he and Wilbur would not have had any trouble with the Smithsonian. (It sounds to you that Samuel Langley was an upright honest man with integrity. You're wishing at this point that you had brought a concealed audio recording device, but lacking that, you'll have to remember as much of this conversation as you can and write it down later).

Regarding Langley's Aerodrome, Orville Wright indicated that it weighed 17 pounds per horsepower while the Wright plane weighed about 60 pounds per horsepower. The Aerodrome was structurally weak. The wings of the Aerodrome were flat and not cambered. When Orville's patent infringement suit had been won, Curtiss in an attempt to nullify that decision, the Aerodrome had been resurrected and much strengthened and powered with a more powerful motor, they had tried to obtain sustained flight with it. (You recall how this shameful episode resulted in the 1903 Flyer being sent to London for display in lieu of the Smithsonian. Fortunately in 2018, the Flyer is proudly displayed here in the States, but here and now, in 1940, the Flyer still resides across the ocean. You want to tell Orville that it eventually will all work out, but again, there is that whole "Butterfly Effect" thing to consider, and you'd rather not return home to find that Biff Tannen is now mayor of Dayton, so you keep silent.) 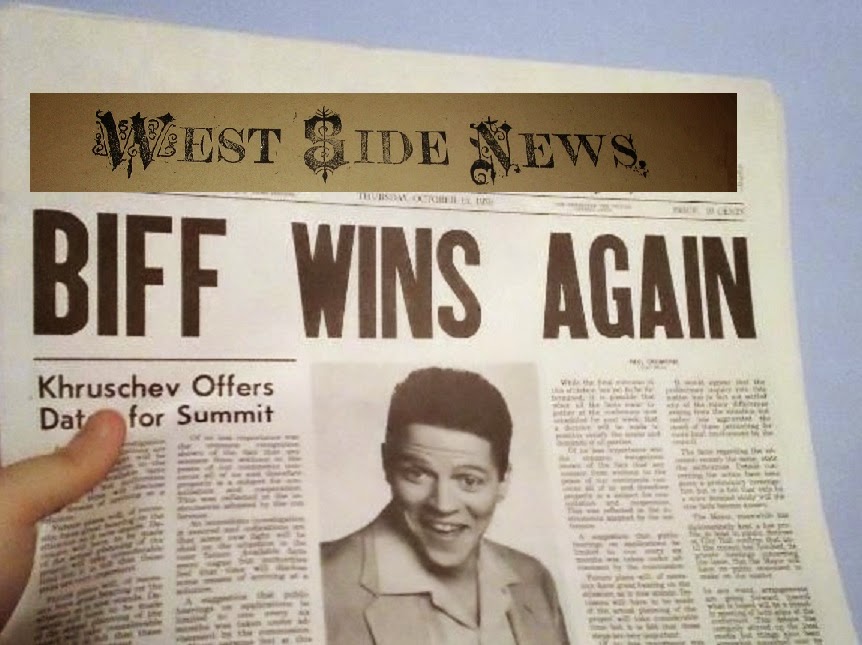 You ask Orville who had done the first "Night Flying". He asks you if you mean cross country flying. You clarify, no, the first flight in an airplane after night fall. And he responds he thought he probably had made the first airplane flight after dark, at Potsdam, Germany, making his landing by the light of old fashioned automobile headlights.
Orville's secretary Mabel Beck has left and Orville Wright leads you to his small office across the hall, with a small drafting table in the corner, and takes down a wooden box in which contained a metal lateral airplane stabilizer model with pendulum mechanism. A small rectangular metal blade rotating on a horizontal axis slows the almost imperceptible swing of the "pendulum". Before realizing what you had said, you blurt out that it looks somewhat like the flux capacitor. Cautiously, you look for Orville's reaction, and he simply smiles, and says he has another engagement that he will make alright in his car. As you struggle with your coat, he makes a motion to help you, but you wave him off ever so slightly for it didn't seem right to have him help you. As you turn to leave, he tells you to enjoy the rest of your day at Hawthorn Hill. Surprised, you look at him, and he smiles, and says, "Well, who do you think installed that vault in the basement?"
As you walk up to Third Street and look back, you see him walk briskly down the steps, dressed in dark coat and his famous derby hat, stepping into a good looking roadster, making a "U" turn and driving north. Then just as suddenly, you find yourself back in the vault at Hawthorn Hill, just as the door is opened by your tour guide. Embarrassed, you step out, excuse yourself, and head outside. Reaching into your pocket, you draw out the Huffman Prairie map, complete with Orville's sketch. All in all, a good day.

Note: This post centers around an actual interview with Orville Wright by John W. Wood, author of Airports, Elements of Design. The interview took place February 15, 1940. The actual comments made by Orville are word for word per the handwritten interview notes in my possession. Rather than just share the notes as written, I thought it would be fun to imagine the time travel event above.


For the second Journey Back in Time, see "Great Scott! It's Wilbur Wright Back in 1909!"