(Updated 11/08/18) Wright Brothers' Home Days Celebration, 1909 (published 2003, Carillon Historical Park) with photo's of Andrew S. Iddings and text by Mark Bernstein is an excellent telling of events of Dayton's recognition of Wilbur and Orville Wright's accomplishments. Page 2, Mark writes "All the photographs that follow were taken by a Dayton attorney, Andrew S. Iddings. As Iddings was working entirely on his own behest, this record of the event is not complete. (Link for Wright State University Archives Andrew S. Iddings information.)  Most of the photographs were taken at the Montgomery County Fairgrounds and during the Grand Parade through town that afternoon." Day one of the Celebration, June 17, 1909, began with "all factories and others having whistles and bells to blow or ring them for a period not to exceed 10 minutes." Mark writes "At 2:30 p.m. , the Dayton fire department and units of the U.S. Army and Navy paraded down Main Street from Monument Avenue to Sixth." On page 14, a street view of the fire department parade is shown (Link for WSU core scholar archive photo)

Below, is a photograph of the fireman's parade perhaps taken from the upper floor levels of the United Brethren Publishing House. The scene is looking north on main street. The old Courthouse can be seen at the area with the two sets of four columns, center left. Furthermost north, the Soldier's Monument can be seen, just beyond which is the main street bridge crossing the Great Miami River. I believe Andrew Iddings was standing just beyond the two sets of four columns on the west side of Main Street as he took the pg 14 photo mentioned above. The photo below likely captures Iddings on the street taking the photo of page 14, and it would be fun investigative work to identify him if possible, as the resolution of this scene is quite high. The photo below is signed "Complements of Edward E. Burkhart." Burkhart served as Dayton's mayor from 1908 to 1911. Page 46 of Mark Bernstein's book, he writes "In presenting the city's medals (to Wilbur and Orville Wright), Mayor Edward Burkhart stated, 'With the perfect development of aeroplanes, wars will be only an incident of past ages.'" Ok, so Burkhart wasn't the greatest prophet.....

I took the following photographs of Main Street in Dayton, from the upper level of the Centre City Building in November of 2011. Centre City Building was originally known as the United Brethren Publishing House, the location of the Wright Brothers Exhibition office in 1910 and 1911, and the location for the publication of the Religious Telescope. Comparing the two photographs of 1909 and 2011, two points of reference common to each are the Old Court House, and Soldiers Monument.(The Court House construction was completed in 1850; in 1859 Abraham Lincoln stood at those front stone steps during his presidential campaign.)

The postcard views below are interesting in that they show the contrast from the joyous 1909 parade to deadly 1913 flood waters passing by the historical Court House structure. See my post "The 1913 Dayton Flood, and the Wright Family".

From the Centre City (United Brethren Publishing House) Building, looking south on Main Street,  among the path of the 1909 Celebration parade, now stands a sculpture commemorating the first flight of December 17th, 1903.

Many various postcard views associated with the two day celebration were printed, and the ones with personal invitations or eyewitness accounts of the event have special significance, and several are shared below: 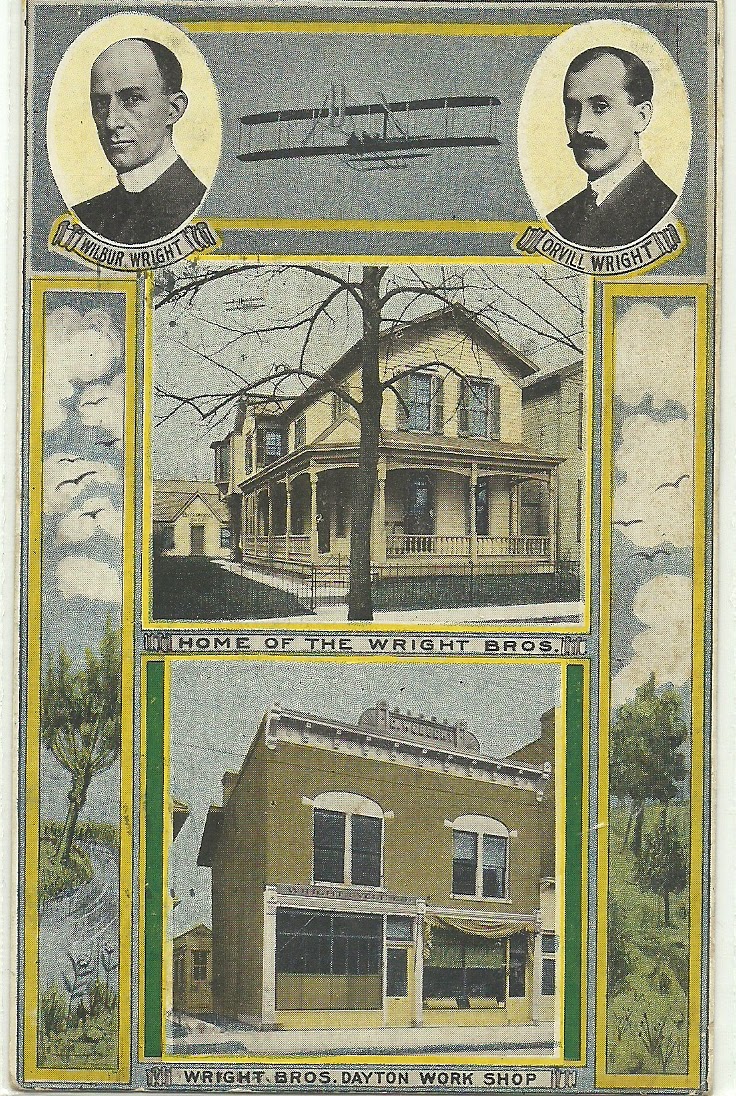 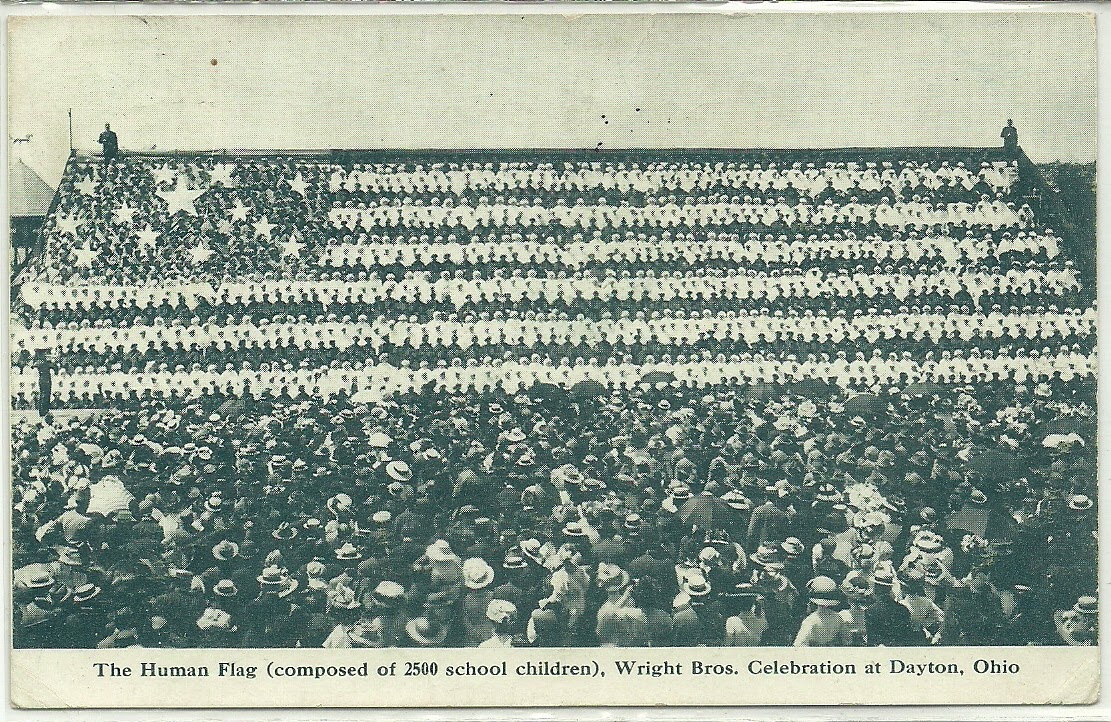 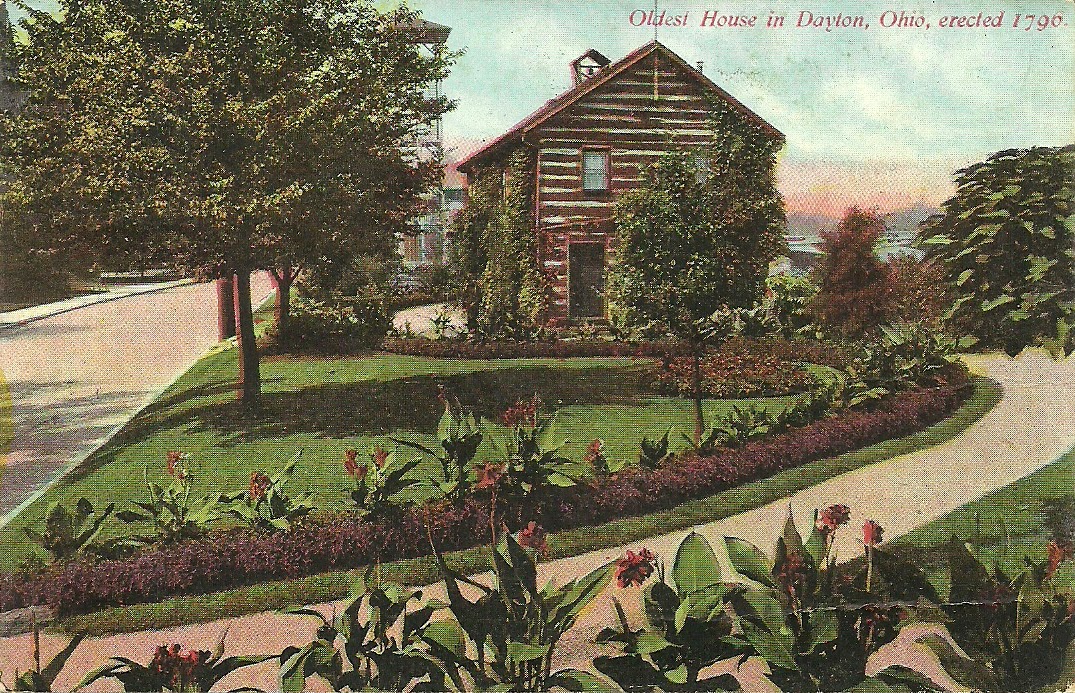 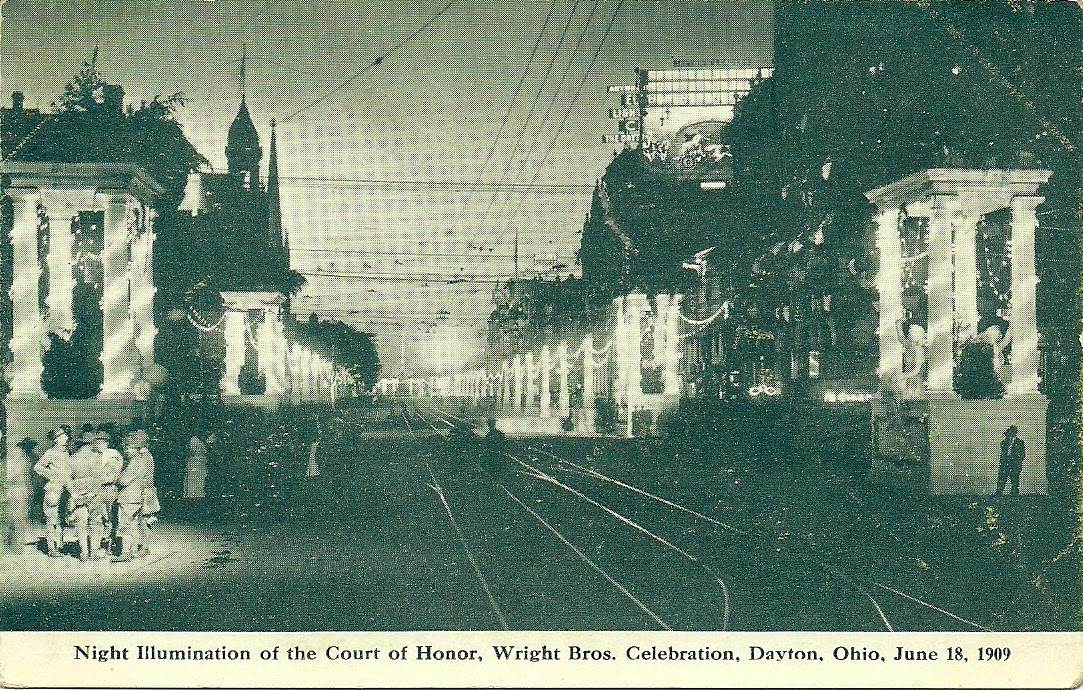 This next photo postcard is exceptionally nice, high detail, and a really nice eye witness message on the back. The statues in the photo are one of four pairs. Mark Bernstein indicates on pg 99 of Wright Brothers' Home Days Celebration, 1909- "Four pairs of 12-foot statues framed the Court of Honor, with each pair separated by an evergreen and strung with wreath and roping. The statues were the work of Joseph Adelbart Horchert, a German-born sculptor..." Mark notes that the celebration cost $30,000. The message on this card makes note that the Court of Honor cost the city $3350. Henry Kabierske was the decorator and designer of the event, and was assisted by Horchert. This scene is looking north on Main street. Steele High School can be seen at upper left (pointed high tower). Katharine Wright taught here up to a year before this event. 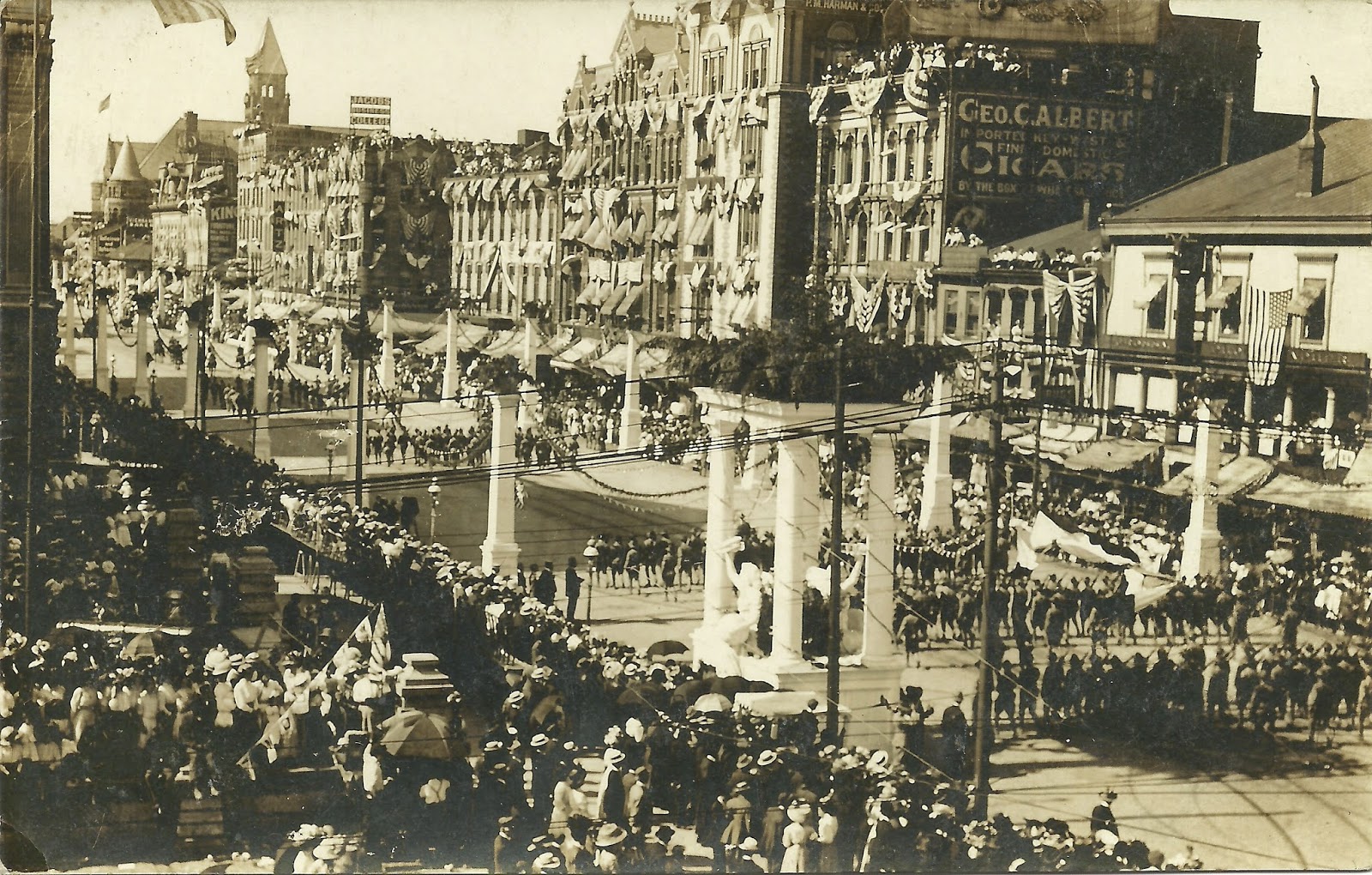 "Wright Bros. Celebration Dayton -O- June-17-18-1909 This magnificent "Court of Honor" 3 squares long cost the city $3350 to erect. Thousands of electric lights illuminated it at night- All buildings in city decorated in flags & bunting. Notice figures of women on corner pieces holding world in one hand and air-ship in the other- There were 6 of these beautiful corner pieces- This is 3rd & Main Str- Our seats (reserved) were in front of the new court house, back of 4th lamp post in this picture- Grace"

The Official Program for The Wright Brothers Home Celebration listed the events of the two day celebration. The program below was saved by O.B. Kneisly, who served with Lorin Wright on the Dayton City Commission. On this 5-member commission, Lorin served from 1920-1927. Kneisly served 1921-1925.


The Unofficial Program for The Wright Brothers Home Celebration included pictures of the Wright Family members, of Charlie Taylor, and of their home. Also included were the events planned for the two day celebration, Dayton attractions, and local business advertisements. Perhaps because this was not the "Official" program, the correct spelling of the Wright family members wasn't deemed necessary...... 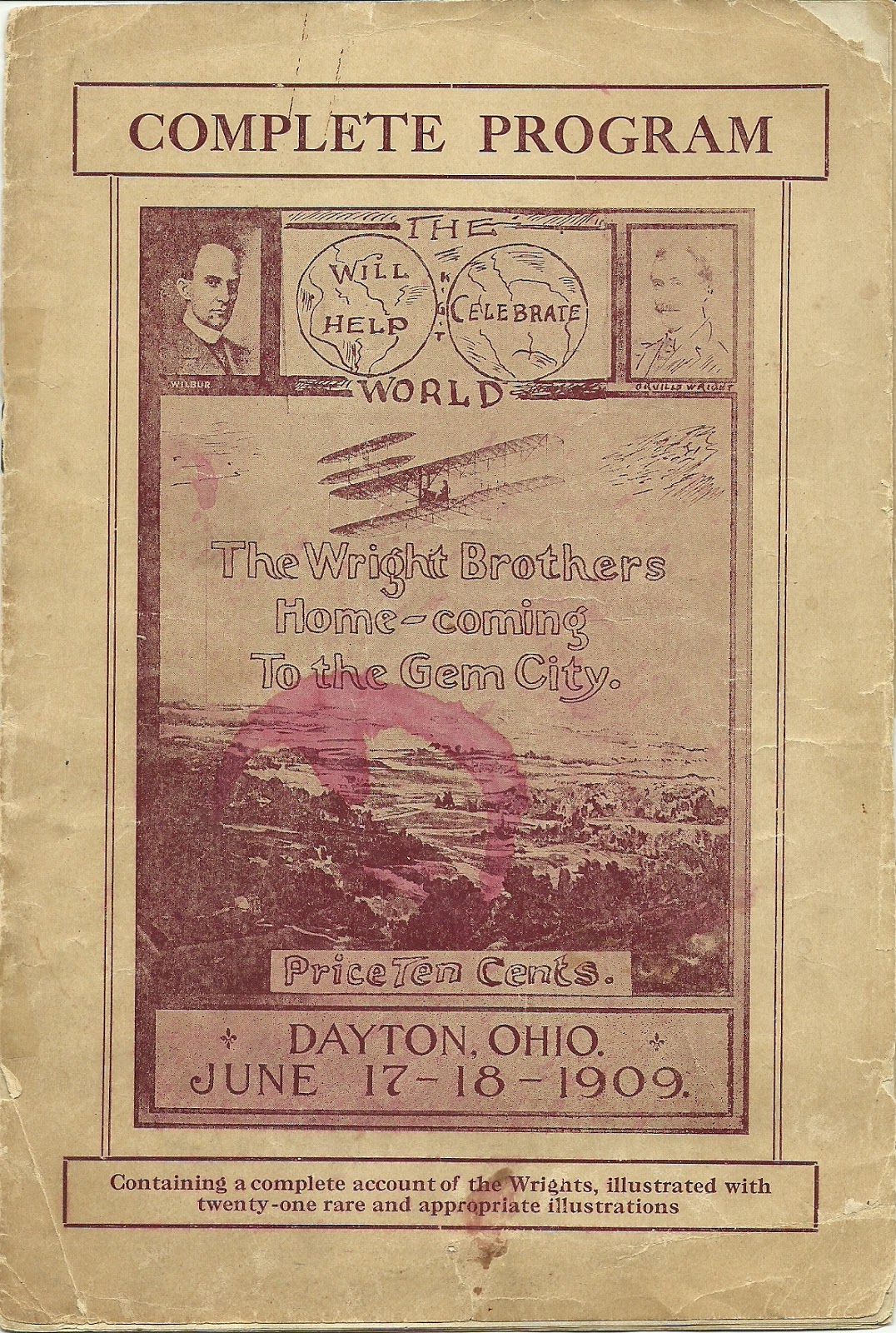 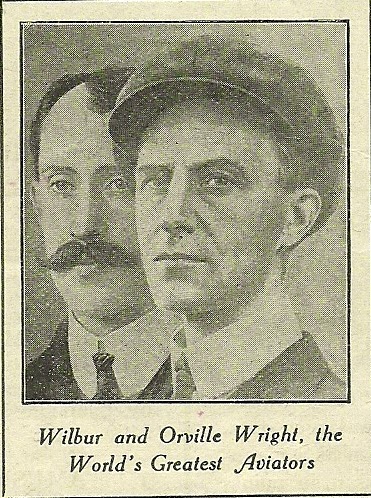 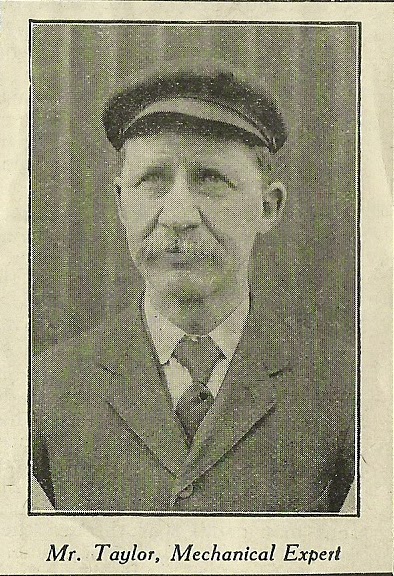 Recommended Reading on this subject-