Brazil, You Dumont Know What You're Talking About!

During the opening ceremony of the Olympic Games last night (August 5th, 2016), the hosting nation of Brazil repeated the same tired claim that Santos-Dumont was the first to fly.
Brandan Maloy of Sports Illustrated wrote yesterday (August 5, 2016)-

"According to Brazil, Alberto Santos-Dumont’s flight outside of Paris in 1906 was the first human to truly fly, although the Wright brothers had completed several flights in secret three years before, which Santos-Dumont’s countrymen claim did not count for a variety of reasons." 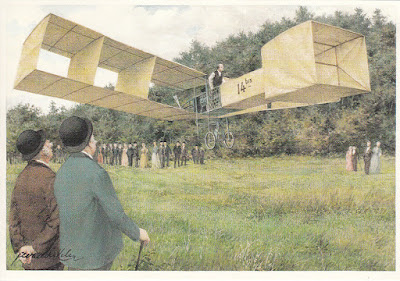 Just a comment or two.....The Wright Brothers completed four flights three years before, at Kitty Hawk, not in secret, but before witnesses. They then made 160 flights in 1904 and 1905 at Huffman Prairie, near Dayton Ohio! As reported by the Wright Brothers to Augustus Post, Secretary of the Aero Club of America, March 2, 1906, "Flights to the number of more than one hundred had also been made at Dayton, Ohio, in 1904 with a second motor flyer. Of these flights a complete circle made for the first time on the 20th of September, and two flights of three miles each made on the 9th of November and the 1st of December, respectively, were the more notable performances.....In the past three years a total of one hundred and sixty flights have been made with our motor-driven flyers, and a total distance of almost exactly one hundred and sixty miles covered..."  By September/October of 1905, they made flights of 11.125 miles, 12 miles, 15.25 miles, 20.75 miles, and 24.2 miles! For the benefit of those in Brazil, in lieu of miles, the equivalent distance in meters is listed below, from the Aero Club of America March 12, 1906 bulletin:

The following information is repeated, compiled from two previous posts for those readers interested in true facts of history. For those who believe 1906 occurred in time prior to 1903, 1904, and 1905, I guess you can stop reading.

The Wright Brothers were first in manned powered flight. Ohio (specifically Dayton Ohio) makes claim as the Birthplace of Aviation. North Carolina makes claim as the First in Flight. The Wright's aeroplane was designed in Dayton, tested in North Carolina, and eventually mechanically flown there in December of 1903. It was then perfected in Dayton in 1904 and 1905. These historical facts are based on one of the most thoroughly documented inventive processes in the history of the world. Records of engineering calculations, personal diaries, letters of correspondence, fantastic exhaustive photographic records, artifacts, and eye witness accounts of many outstanding reliable citizens attest to the truth and accuracy of the timing and character of the events.  The flight was, "the first in the history of the world in which a machine carrying a man had raised itself by its own power into the air in full flight, had sailed forward without reduction of speed, and had finally landed at a point as high as that from which it started". The flight was repeated, four flights total, in front of reliable witnesses, and a telegraph indicating success was sent home that afternoon. Newspapers carried the story the next day, December 18, 1903. Witnesses to the first flight included J. T. Daniels, W. S. Dough, A.D. Etheridge, W.C. Brinkley,  Johnny Moore, and Wilbur Wright, of course. J. T. Daniels snapped the shutter of the "5 x7" Korona-V Gundlach dry glass plate camera, taking one of the most famous photographs in history. This camera is on display at the Carillon Historical Park in Dayton.

These flights were the result of exhaustively documented systematic experimentation of 1900, 1901, 1902, and 1903 as performed by the Wright Brothers. The flights were modest and reasonable for a new technology, one to be improved upon in 1904 and 1905, with the end result being the world's first practical flying machine, now on display at Carillon Historical Park, Dayton, Ohio. The 1903 flyer is on display at the Smithsonian National Air and Space Museum.


"My dear sir: In response to your request of November 21, I take pleasure in telling of my observance of the Wright Brother's aeroplane. Early in October, 1905, it was my privilege to witness a very successful flight made by Mr. Wilbur Wright in the aeroplane of their own invention. When I arrived at the appointed place, the air-ship had already ascended and was flying at what seemed to me to be a distance of fifty feet from the ground, and in a rectangular course....A distance of twenty-four miles was covered on this occasion, in about thirty-eight minutes. The turns at the various corners of the field in which the flight was made, were made easily and gracefully, and it seemed to be as easy for Mr. Wright to operate it as for any one else to ride a bicycle....I believe that the aeroplane of the Wright Brothers has successfully solved the problem of aerial navigation.
Very truly yours, E.W. Ellis, Assistant City Auditor" Dayton Ohio, December 5, 1906


"Gentlemen: In reply to your inquiry of recent date, I would state that I witnessed a flight of the Wright Brothers aeroplane and there exists in my mind no doubt that, to the Wright Brothers is due the credit of the solution of aerial navigation without the aid of balloons or like contrivance. The day I witnessed their flight the aeroplane remained in the air at a height of between 50 to 100 feet for a period of about 23 minutes, and in that time covered a distance of about 15 miles, according to the meter attached to the aeroplane. The machine appeared at all times to be under perfect control, the operator elevating and lowering it at will. In his flight he described a circle of about a mile in circumference. Unfortunately, however, he was obliged to descend on account of a hot bearing...
Yours very truly, Howard M. Meyers, Dayton Ohio, November 25, 1906.

"Dear Sir: The brothers, Wilbur and Orville Wright, have lived from childhood within a few squares of my home and have always had the fullest confidence of all their neighbors and acquaintance; but I must confess that when I read that they had solved the problem of human flight down on the coast of North Carolina I did not believe it. I thought that what they had accomplished was not real flight at all, but due to some peculiar condition of the atmosphere in that locality. I believed mechanical flight was impossible as perpetual motion. It was not until I saw one of their flights, near Dayton, with my own eyes that every doubt was removed....I simply cannot describe my feelings during the first few minutes. When it was well above the tree-tops it continued on a level course in easy circles about the field, for more than half an hour, as timed by several spectators present. The operator brought it to the ground, without any damage whatever, directly in front of the building in which it was housed. I had seen the eighth wonder of the world!
Respectfully yours, Henry Webbert, Dayton, Ohio November 24, 1906

"Dear sir: I take great pleasure in answering your letter of November 21, 1906. Along with some friends, I had the privilege of witnessing a flight of the Wright Brothers, in the autumn of 1905, a few miles east of Dayton. The machine started from a short track lying on the ground, and rose into the air on an inclined path till it was well above the height of the tallest trees. It then kept on a horizontal path flying round and round the meadow in circles about a quarter of a mile in diameter. The flight lasted more than a half hour. At last Mr. Orville Wright shut of the power and landed as gracefully as a bird just in front of the building in which the machine was kept. I can only say that it was the most wonderful sight of my life....
Yours respectively, Chas. Webbert

Additional eye witness accounts to the 1905 flights were documented in American Magazine of Aeronautics, Jan 1908, The Wright Brothers Flying Machine, by Captain Hildebrandt-

"...I went to Dayton, and here visited the father of the brothers, the old American Bishop, Milton Wright. The old man of about seventy years of age verified in simple language that he had witnessed the longest flight. He happened there by chance. Troubled constantly in regard to the fate of his sons who had subjected themselves to such daring flight experiments, he had frequently gone to the trial grounds and thus had been witness of numerous ascensions. He would not go into full particulars in the matter. If I had any doubts whatever after my conversation with the two competitors of the Wrights, they would have been dispelled after my visit with the Father. I believe that there can be few suspicious people who would doubt the words of this old, honorable priest...."


"We interviewed Mr. C.S. Billman thereafter, secretary of a bank. He exclaimed excitedly: Well, she flies! Then he pictured how imposing it looked when the flying machine rose from the ground and flew over the fields about the height of a tree in a slightly undulated manner; how readily she answered her rudder and returned to earth...."

"....a young druggist, Reuben Schindler, who had witnessed the long flight without being invited. On one day when he had expected a flight would be made, he had followed the father Wright at a distance and had thus witnessed an excellent flight. A laborer happened to come into the drug store, who had also been an uninvited onlooker to a flight, who confirmed in an exhaustive manner the statements made by Mr. Schindler."

"A good many details on the construction of the flyer were given to us by a German hardware dealer, Frank Hamburger, who had been a keen observer and endeavored to make his statements more clear to us by aid of some sketches. The druggist William Foots (Fouts), also showed a good understanding for the technical matters and gave us a few valuable points...
e. "Finally, we succeeded in talking with two more very important people, C.V. Ellis, officer of the law, and Torence Hoffman (Torrence Huffman), president of the largest bank in the city."

In "To Conquer the Air", James Tobin, 2003, provides additional names of eye witnesses to the 1905 flights, pg 235, "With the first hint of autumn in the air, the brothers began to invite guests to Huffman Prairie. Lorin and his wife, Netta, had seen a flight or two. Now they came back with their children. Kate came on October 4, though it was a school day, and saw Orville fly more than twenty miles. Torrence Huffman came again, as did a number of friends and neighbors. Among them were the brother's landlord on West Third, Charles Webbert, and his brother Henry, who was Charles Taylor's father-in-law. Bill Weber, a plumber, came; and Ed Ellis, an old friend from the Ten Dayton Boys club who was now assistant auditor of the city of Dayton; Bill Fouts, a druggest and friend of Orville's, and Fout's friend Theodore Waddell, an employee of the U.S. Census Bureau"...pg 237, "Waddell was especially struck by the extraordinary means of moving the flyer around on the ground....He asked one of the brothers if he could give a hand in hauling the machine back to the shed. He could if he wanted, he was told, but he didn't need to help. As Waddel watched, "They.....starting the engine at slow speed, let the machine lift itself clear of the ground and walked it back to the (shed). It was about the most uncanny sensation I ever experienced...

The Outer Banks Voice- "Oh no you didn't Brazil! We're First in Flight"