At the age of 19, Wilbur Wright suffered an injury in Dayton, participating in a group game on ice skates. He was struck by a "bat" in the face, damaging some teeth. The extent of damage to his teeth is unclear, and the exact nature of dental repair that was necessary is not known, but what is known is that he was self-conscience of his smile, and so rarely showed it. With this I can identify, having crooked teeth and a chipped front tooth as a teenager. But, those tight lipped smiles do exist, and this simple post provides the evidence. Something I've learned- it's not the teeth that matter much, as I've seen some very sweet toothless smiles.....it's the sparkle in the eyes reflecting the inner spirit. 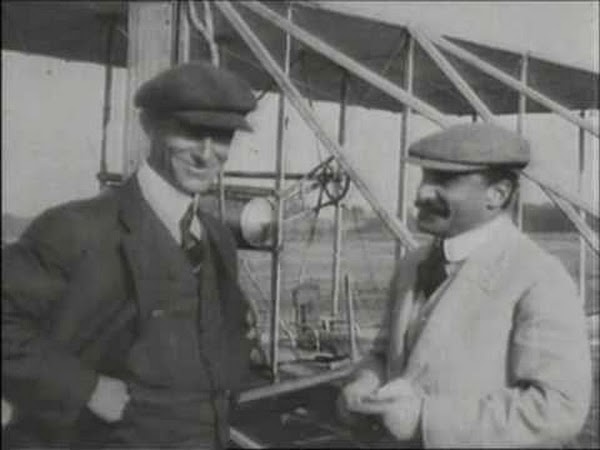 At Governor's Island, Hudson-Fulton Celebration "A Week with Wilbur Wright" as reported October 17th, 1909, New York World by H.M.Smith-
"He did not announce that he was about to make a great flight: that he was about to do anything out of the ordinary.
'It looks like a good day for flying,' was his characteristic announcement, made when he arrived at Governor's Island at 9 A.M.. Pointing a finger at the newspaper men gathered around his shed he remarked humorously:
'It'll do you boys good to do a little work after loafing around here for a week.' Immediately a dozen correspondents rushed for the aeroplane, bringing it out of the shed and dragging it several hundred yards over the sand to the starting monorail.
He had not told them of his intention of flying up the river and they thought he was merely going to make a short flight around the island. They were taken completely by surprise when he announced in a very matter of fact way that he was going to take a look at the warships.
After he returned from his flight it was the hardest work getting him to tell his story. The reporters had to draw it out of him bit by bit. His success had not changed him in the least and he was still the modest, self-controlled, retiring Wilbur."
Index of Topics
Posted by Matt Yanney at 8:26 PM